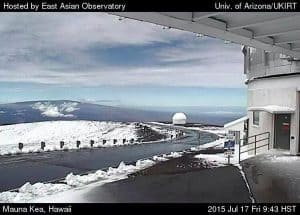 Yes, you heard that news report correctly; it really did snow at the summit of Mauna Kea, Hawaii on July 17, 2015. Icy conditions even caused the closure of the Mauna Kea Access Road early Friday morning. By midmorning the temperature was still only 36 degrees, with a wind-chill of 27 degrees; traces of the 1.5 – 2 inches of snow were still visible around noon. So compare THAT Hawaiian weather to our July weather in Chicago!

Towering nearly 14,000 feet above the sunny beaches and tropical palms of Hawaii’s coastline, the temperature at the peak was near freezing on Thursday night. A low pressure trough moving from east to west across the Big Island ushered in a bank of thunderstorms that brought heavy rains across much of the region. A massive thunderstorm rising high above the dormant volcano, coupled with the increased moisture and near freezing temperatures, produced the snowstorm. According to the Mauna Kea Weather Center, a ranger reported fog, moderate winds, mixed rain and snow, and 1.5 inches of snow at the mountain’s peak early Friday morning.

Snow isn’t unusual at the peak of Mauna Kea; despite its location on a tropical island it’s pretty chilly all year long. The average high is only about 40 degrees while the average low is definitely anything but tropical at just 25 degrees! It’s not uncommon for winds at the summit to top 120 mph. Combine those wind speeds with a 13,796 foot elevation and weather conditions are subject to rapid changes. Under the right conditions, a peaceful sunny day can give way to a raging blizzard in no time at all.

On the night of the summer snowstorm, the low in the city of Hilo, only 38 miles away as the tern flies but at an elevation of just 59 feet, was 71 degrees. In fact, a review of the National Weather Service’s records for Hilo show 8 days so far this July that either tied or broke previous high temperature records. The entire state is experiencing a record-breaking heat wave with nearly two dozen new records set so far this month. If you‘re still skeptical about a snowstorm in the middle of a heat wave, check out these photos from the Mauna Kea Web Cam, courtesy of Hawaii News Now.

As this event shows, it’s never too early (or too hot) to start planning for snow. Contact us soon to set up a plan for dealing with the snow you know is coming next winter.