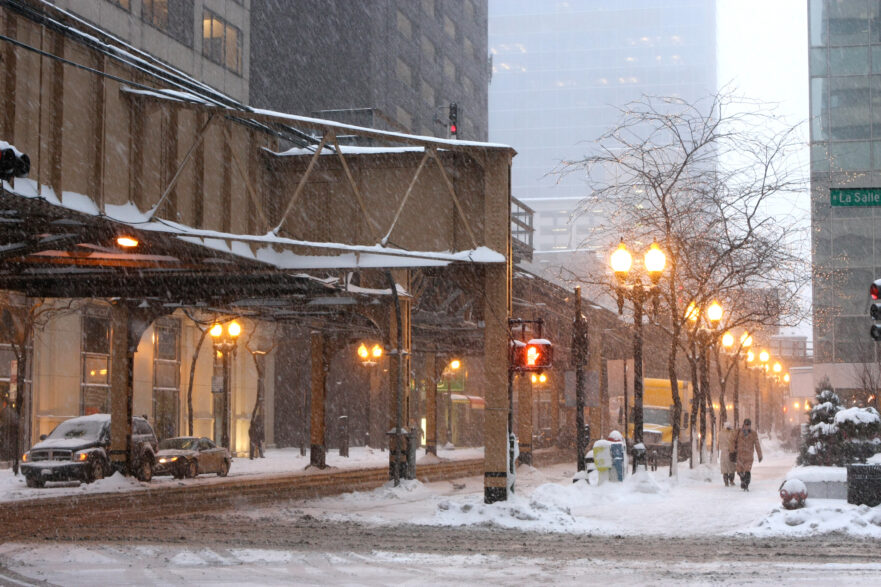 Snow plowing is not an area to take for granted. If you aren’t prepared for the worst, you may find yourself buried and scrambling to get back to normal. Such was the case for Chicago in early 1979, when a short wave winter storm front crossed the Great Plains and took aim at the city.

It had already been a long winter. Overall, the 1978-1979 winter season would bring a staggering 89.7 inches of the white stuff. That was more than twice our yearly average! Even the most adamant winter fan was tiring of the daily struggles caused by the vast amount of snow. By the middle of January, tensions were running high and it was only a matter of time before things were going to come to a head.

The forecasters had called for a few inches of snow. A tired public had enough. There were already ten inches on the ground and city services were struggling. After putting up with a lackluster performance from the city all winter, people were wondering if things were going to look up.

One citizen wrote in to a local paper to express her frustration. Every city department experienced issues throughout the city as a lack of snow plowing frustrated movement on a daily basis. The Chicago Tribune printed the letter on January 12, 1979. As a Tribune writer expressed in an article about the storm in 2014:

“‘As a taxpayer and motorist I am outraged at the condition of the Chicago and suburban streets,’ the letter writer wrote to the Tribune. Streets weren’t plowed. Stalled and double-parked cars were blocking traffic everywhere, she explained. ‘Come on, City Hall. Chicago has enough manpower and resources to get the problem cleared up.'” The snow she was complaining about had come on New Years. It had brought 9-12 inches across the metro area. Her frustration represented the confusion many hardy, snow-wise citizens felt. This was Chicago, after all! How could things have gotten this bad? Little did she know that things were only going to get worse…a lot worse.

The writer continued later in the article: “For Chicagoans, the worst was yet to come. Over the weekend, the city was walloped by a massive blizzard that dumped 20.3 inches. At the time it was the second-largest snowfall in city history. As bad as that was, the pain and inconvenience were just beginning.”

The Storm Barrels Through

The snow began in earnest the next day.  It would snow for the next 38 hours.  White-out conditions were experienced throughout the city.  Wind gusts of over 38 MPH drove snow into every crack and crevasse, roaring down streets and alleyways.  The city plows were delayed getting out for snow plowing as the city continued its spartan approach to snow management.  Cars and buses became stuck in the increasing snow, clogging the streets and making it even more difficult to plow them.

The O’Hare International Airport closed and all flights remained grounded for 96 hours.  This affected fight traffic around the world as airports across the United States scrambled to accommodate the delay.  Snow plowing seemed to be an issue there, as well. Tens of thousands of travelers were stranded as they sat waiting for snow and ice encased aircraft to be finally able to take them to their destinations. Driving out of that white nightmare was out of the question for most, but once the opportunity presented itself some took up the challenge. One way or the other, getting out of Chicago would take the better part of a week.

Mass transit was even further crippled as the Chicago L system ground to a halt.  Line after line of the elevated train system was closed as cars began to get stuck or broke down.  Attempts were made to improvise plows in front of the electric rail cars.  Initially this seems to help keep things running.  The plows were made of multiple layers of plywood.  This made the plows light and had the benefit of not interfering with the high voltage rail that powered the cars.  Unfortunately, much of the snow still pushed under the cars and into the underneath of the engine compartments.  Additionally, the snow often carried with it the salt compounds that the road crews used.  As some of the cars travelled over street crossings they picked up this mixture.  It quickly corroded the braking systems and electrical wiring.

The effect was to take over half of the rail cars out of commission.  During the height of the storm and for weeks afterward the remaining trains had to push heavy loads of snow out of the way.  As the number of trains dwindled, people tried to crowd onto the remaining cars in larger numbers.  Some passengers even risked life and limb by hanging on to the sides and in between cars.  Due to this additional drag from the weight of snow and commuters, it took 3-4 times as long for the trains to complete their runs.  Eventually all but the Lake-Dan Ryan line was closed.  This failure pushed people crowding back onto the city bus lines.  Snow clogged streets and overcrowded buses delayed those vehicles by hours.

Months Of Mismanagement Take Their Toll

Months of frozen precipitation finally brought the city to its knees.  Weary and harassed public workers labored to free the City of Broad Shoulders from it’s icy blankets.  The plows were leading the fight, struggling to clear the streets ahead of the other services. Snow plowing wasn’t an easy job, especially as the layers of snow slowly compacted into ice.  The remainder of January and most of February remained below freezing.  Temperatures high enough to bring the spring thaw didn’t arrive until after the middle of March.  In all, the 1978-1979 winter season ranks as the second coldest on record.  It didn’t help that the two winters before that had also ranked in the top five.  And while the blizzard had moved on, the next several days brought more of it.

The tension came to a breaking point.  Fights broke out in the start-and-stop traffic, resulting in many injuries and at least one fatality.  Businesses struggled to reopen without proper snow plowing and snow removal services.  People relied on bank lobbies to be open and stores to provide staple foods.  Demand was high, but supply chains had been broken and food was running out.  Medical needs were remaining unmet as hospitals and clinics struggled with staff and supply shortages.  Ambulances were unable to to get to homes and firetrucks were prevented from getting to some structures.  One apartment fire in particular resulted in 23 injuries and one death.  Roofs strained under the weight of the combined four feet of January snow, causing the collapse of 50 commercial roofs.

A Mayor Under Fire

The bitter cold that settled in after the storm transformed the last bit of it into a powder.  The powdery snow was pulled into the self-ventilating engines of the L rail cars, which froze up the air intakes and clogged the ventilation.  This led to more cars stopped and in need of repairs.  The L was crippled and its managers were scrambling to keep it running.  Although their strategy to provide service the largest number of people was sound, the neighborhoods that were cut off were predominantly occupied by poor and minority residents.  This didn’t go unnoticed.

Snow plow drivers and CTA workers took much abuse as citizens took out their frustration at the poorly handled recovery.  The poor road conditions and stranded cars exasperated the problem.  The promise of cleared parking lots took too long to materialize.  Garbage piled up and many of the streets were impassable.  The city focused on the main arteries first, which was the standard attack for any city.  However, the residential streets didn’t start to be cleared until January 20th.  That is, except for the block where the mayor lived and the former mayor’s family lived, which was reported to be “thoroughly plowed” before the 19th.

The Winter of Our Discontent

By January 18th, Mayor Bilandic’s administration was under siege. He met the initial criticisms with humility and a contrite spirit. He acknowledged that he had “made mistakes” and that his administration needed to work harder to bring Chicago back to a fully functioning city once again. But by the 18th the Mayor began to undermine what little support he had left. Snapping at reporters he insisted that uncleared parking lots had already been cleared. Some others had, but the uncleared streets made them impossible to access. He then ordered the police to begin issuing tickets and having cars towed, with no exceptions for illness, infirmity, age, or poverty. He insisted that any hardship cases could be pleaded before a judge.

Every sector of life in Chicago (work, school, transportation, public services, etc) was crippled until the end of January.  The daily reminders of the trials and hardships of that January didn’t melt away until late March.  That January was still indelibly etched into Chicagoan’s memory as they went to the polls in late February to oust their two-year mayor.  Mayor Bilandic’s poor planning and handling of the winter storms of early 1979 cost him his office in the second-largest primary election turnout in Chicago’s history.

How well have you planned for your company’s snow plowing and snow removal services?  Will your business be paralyzed under unanticipated snowfall as your competitors reopen for business?  Protect your business today!

A snow removal service contract with Brancato will ensure that we have you covered no matter what winter weather is headed our way!  Contact us today and get your free quote.  Our sales staff are friendly and knowledgeable and would love to help you figure out how best to meet your snow removal service needs.  After that, one of our service managers will set up a site visit and we will get the process moving forward quickly and easily!