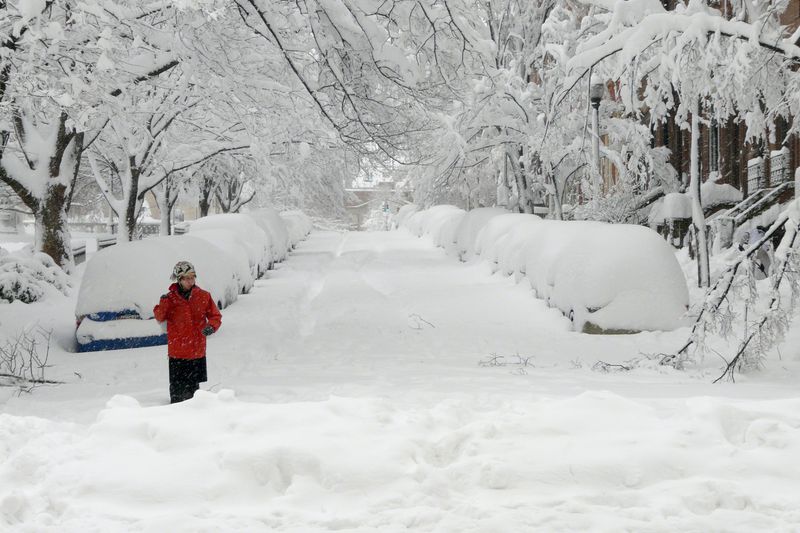 Getting a Commercial Snow Plowing Contract is Important!

There’s nothing like a powerful snowstorm to drive home the importance of a commercial snow plowing contract for business owners.  You don’t want to be sitting at home listening to weather reports and worrying about reopening your business.  Many businesses go through that year after year, lining up behind their competitors that already had a contract in place.  Back in February of 2010 many business owners desperately wished they had thought ahead.

The Story of Two Storms

Like most winter storms, this one started in the Pacific Ocean. But for what would eventually be dubbed “Snowmageddon”, this one started as two very different systems.  The northern system was a colder system that flowed into the central Rocky Mountains and down into the Great Plains.  The second system was a far more powerful southern storm that came ashore along the southern Pacific Coast.  It brought snow to the mountains of California and Arizona as it tracked east along the US-Mexican border.

Fills the Reservoirs and Buries the Mountains

As the southern storm moved along the border it had very different effects for each side.  The Mexican regions saw unprecedented rainfall that caused landslides and extensive flooding.  The storm broke rainfall records across the region as far south as Mexico City.  The intensity of the storm did significant damage and killed at least fifteen people.  The effects of the deluge were not altogether negative, however.  After experiencing an extended drought, the storm brought welcome moisture.  The water rationing that ruled the day for nearly a year gave way to a surplus that completely filled the reservoir systems across Mexico.

North of the border the same system transformed that rain into snow, dumping over a foot across the mountains and high desert of Arizona and New Mexico.  Ice-covered the roads throughout the area, creating hazardous driving conditions that caused multiple accidents and at least one fatality.  As the snow piled up the roads began to close down, including a section of I-40 for several hours.

A Supercharge for a Imminent Nor’easter

The northern storm was especially mild by comparison.  The upper-level low-pressure system crept through the central Rockies and down into the Missouri River valley.  It blanketed the area with light snow showers.  By itself the weather system was unremarkable, but its colder temperatures and moisture were about to supercharge an already powerful storm.

As the northern system descended into the lower Missouri River valley it collided with the larger surface low-pressure system.  As a result, the energy of the weaker system was absorbed into the southern storm system as it moved into the Gulf States region.  Suddenly the lighter snow showers in the new northern reaches of the colossal storm were intensified.  The snow showers gave way to heavy snow and ice.  Parts of Illinois and Indiana were buried under four-foot snowdrifts.  I-29 in South Dakota and Minnesota was closed.  Most people living on the Indian reservations of the Dakotas were cut off from water and electricity.  Churches and civic organizations stepped in to help them as they dealt with sub-zero temperatures and a foot of snow.  Few people in North Dakota had electricity outside of Fargo.

A Massive Storm Inundates the South

As the massive storm moved into the Deep South, a high-pressure system in the Northeast was pumping Arctic air into the New England and Mid-Atlantic states.  This trough of frigid air would become nearly stationary over the next few days.  This formed a dam effect that would eventually hamper the northeastern movement of the storm after its rampage through the South.

The storm entered the South having left snowy and wet havoc in its wake.  Snow from the combined storm reached from North Dakota to northern Texas.  5.5 billion gallons of water had been dumped into the reservoirs of Mexico.  The storm barreled into the Gulf States at full power.

As it moved in it began to draw even more moisture up from the Gulf of Mexico.  It flooded cities and towns in Mississippi and Alabama.  The torrential rains buffeted Atlanta, Columbia, SC, and Charlotte, NC before turning to freezing rain and then snow.  Over two inches of rain fell across the states as the storm marched up the coast.  This storm was massive, reaching across the breadth of the United States.  Now it had tapped into a tremendous amount of moisture.  Along with a deepening low pressure along the Eastern Seaboard and the cold air funneling down from Canada, this storm had everything it needed to be a powerful Nor’easter.

Transforming Into a Blizzard

As it made its approach toward New England, the normal flow of this superpowered Nor’easter came to a very sudden and surprising halt.  The high-pressure trough that had been funneling cold air from the Arctic into the Eastern seaboard had stalled out.  Consequently, the stationary front now created a dam that prevented the normal movement of any nor’easter into New England.

As the two systems met the supersaturated warmer air from the South mixed with the colder, drier air from the North.  The result was record-breaking.

Pittsburgh was the first major US city to experience the heaviest snowfall.  The snow began to fall late Friday morning (February 5th) and continued to fall for the next 24 hours.  It fell at nearly an inch an hour, finally reaching over 21-inches.  Local schools realized the danger and closed schools early to get children home before the roads became impassable.  Plows were not sent out early enough and were bogged down by the accumulated snow once they did get out.

Since records began being kept in 1871, this ranked as the fourth largest snowfall event in the city’s history.  Suburbs to the south of the city received 26-inches.  Forecasts had only predicted 4-8-inches, which left the cities and towns in Pennsylvania caught unprepared.  As a result, Pittsburgh struggled to clear the streets and restore power and heat.  Warming centers were scattered and ill-prepared.  Some roads went uncleared into the snowstorm that followed a few days later.

Forecasters scrambled as the Nor’easter stalled out while still drawing massive amounts of moisture from the Gulf.  The New England states might be spared the fierce onslaught of the storm, but what would that mean for the states to their south?

The Blizzard Arrives in the Mid-Atlantic

The snow began to fly in the area in the afternoon hours of February 5th. By late that evening, the snowfall had significantly increased and the storm was at its full force. Record after record fell as the storm churned over Virginia, Pennsylvania, West Virginia, Delaware, and New Jersey.

Across the area, snow fell at the rate of 1-3 inches an hour. The differentials in accumulations were very narrow.  In a 25 mile span between Woodbridge, NJ (the south end of Trenton) and Colts Neck, NJ (directly southeast on the other side of Raritan Bay), the difference in snowfall was over a foot. Northern New Jersey saw 1-3 inches of snow, certainly not a record. Meanwhile, the southern end of the state saw snowfall anywhere from 18-28 inches.

Blizzard conditions were experienced in many areas. Delaware and the coast of New Jersey had whiteout conditions as the snow was driven in 50+ MPH winds. The same was experienced in the Baltimore area. While the winds were not as intense inland, 35 MPH snow had the same blizzard-type effect for those residents. Before all was said and done on the morning of February 7th, snow had fallen from this storm from the Great Lakes to Georgia. Parts of the Smoky and Appalachian mountains saw 10-20 inches of snow. The Pennsylvania/Maryland/Virginia tri-state area experienced over 35 inches of snow, with Elkridge, MD reporting the highest total overall of 38.3 inches.

While Pittsburgh was the least prepared of all the metropolitan areas that were affected, it was not alone in struggling to manage the snow. Philadelphia’s public transit system came to a complete standstill and the Philadelphia International Airport shut down. With over 28 inches of snow on the ground in such a short time, the streets of the city were impassible. Washington, DC and Baltimore also staggered in the snowy onslaught. Buildings throughout the region strained under the weight of the heavy, wet snow. On Saturday morning, February 6th, the roof of the Prince William Ice Center in the southern suburbs of Washington DC collapsed just minutes after it was evacuated by alert staffers. Later that afternoon, an empty hangar at Dulles International Airport also collapsed. Across the region, several homes and churches also experienced roof damage and collapse.

The roads throughout the Mid-Atlantic Seaboard were so bad that government officials begged anyone with snow plowing equipment, construction equipment, or tractors to assist the emergency vehicles to get to their destinations. Over 350,000 people and businesses were without power. Travel was banned in Atlantic County, New Jersey and the entire state of Delaware. Commercial snow plowing contractors were met with the challenge of traveling to their clients before they could even begin to dig them out. Other businesses were left waiting or with the daunting task of clearing it themselves.

Public officials and business owners in New England may have sighed in relief when the final flakes of snow fell on February 7th. They had been spared the massive snow totals that they could have received. However, as they watched their neighbors to the south dig out from this monster storm a second blizzard was already on its way.

Plan Ahead for Snow Plowing Services

The only way to quickly recover after snowstorms like this is to have a plan in place ahead of time. That plan includes a snow removal contract with a trusted contractor.   Many commercial snow removal services will assist state and local governments with snow removal in urgent situations, afterward satisfying their obligations to their customers.  This means that those without contracts come in third place to get their parking lots cleared and their sidewalks cleaned.

Don’t get caught without a plan when a plan is most needed.  Brancato is your go-to for commercial snow plowing services.  We can provide you with a clear plan for getting your business back in action.  We can help you stay one step ahead of your competition!

At Brancato, we are dedicated to giving you the best snow plowing services at the best possible price.  Our crews are professional and we pride ourselves on our preparedness for the winter’s worst.  We have teams located throughout the metro area to cover your business when it needs it the most.  Contact us today to get a free consultation and quote.  We guarantee you will be satisfied!