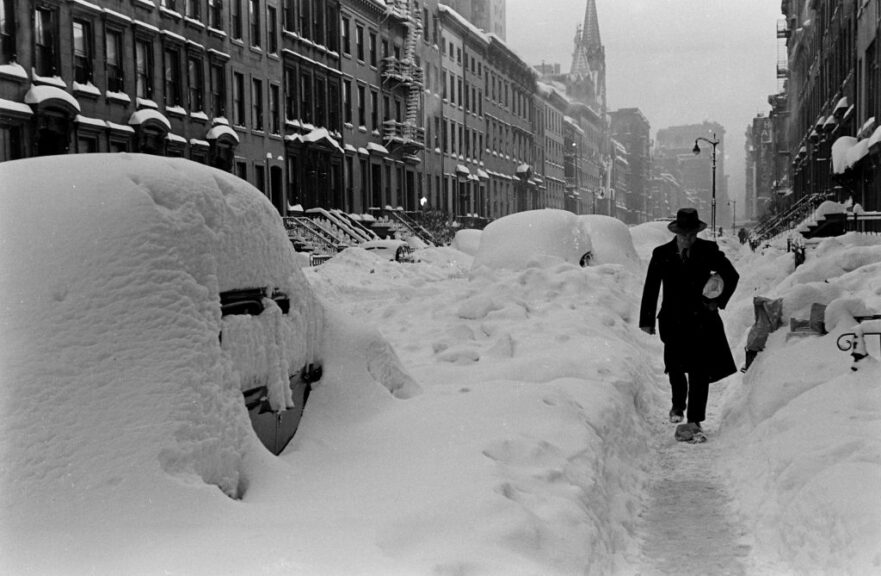 The Importance Of Accurate Forecasting For Snow Removal Services

Snow removal services rely on accurate forecasting to prepare for storms and get businesses cleared quickly.  We have gotten accustomed to modern technology that has given us early warning of snow storms and other weather-related issues.  Long-range forecasts, doppler radar, and weather stations give us a constant flow of information about what the days ahead hold for us.  As our technology has advanced, so has our ability to prepare for disasters before they befall us.  It wasn’t all that long ago that meteorologists struggled to get accurate forecasts.

In the years following World War II, the United States was the swagger of the nations, driven forward by our pride in our position as the world’s atomic-era super-power.  But our ability to forecast had not caught up to our need for that information.  We were still at the mercy of Mother Nature in spite of the modern wonders we had built.  As a plain Christmas passed into a winter wonderland in 1947, New Yorkers quickly learned how much further we needed to come.

The Bergen Evening Record played coy with their readers in late December of 1947.  Writing about the cold and clear forecast two days before Christmas, the reporter toy with their readers with an ironic poke: “…here’s the last paragraph of a holiday weather story and not once did we mention – you know what – a W…. C…….s. [sic]” 1  From all accounts, the snow that had come just a day before would still be on the ground Christmas Day.  However, there was no real hope of some flakes flying as gifts were opened in the morning or when the holiday dinner was served that evening.  The forecast held steady in newspapers across the region.  Cold and clear for the foreseeable future.

Business went on as usual.  Only the most essential services would be available as the week closed out with Christmas Eve on Wednesday and Christmas on Thursday.  Friday would be a lazy day with most businesses closed to allow employees to be with family.  No one suspected that they should stock up on coal to heat their homes for the next week.  No one expected to need to stretch Christmas dinner to last a few more days.  No one knew because no one could see it coming.

The Blizzard That Wasn’t

Off the Eastern Seaboard, the Atlantic Ocean sits and broods in the winter months.  Far offshore, the waves cap and foam with the winter storms that often appear from the south.  While this can be a danger to ships passing between Europe and North America, the coastal states don’t normally need to be concerned about them.  Rarely do these storms track back onshore.  But when they do, they can be destructive.  Such was the case for the famous White Hurricane of 1888.  That storm blew in from the southeast with a ferocity that has yet to be matched in an Atlantic snowstorm.

Back in 1888, there were no weather stations out in the Atlantic to give data to forecasters about an impending blizzard. There still weren’t any stations in 1947.   The city was blind to the storm until it was off the coast of New Jersey.  Even then they couldn’t guess its strength. Although the 1947 storm would best the 1888 storm by 5 inches of snow, the Boxing Day Blizzard wasn’t technically a blizzard at all.

A Storm That Defies Definition

In order to be classified as a “blizzard”, a winter storm must have snow blowing with a sustained wind of 35 MPH (or frequently gusting winds at that speed or faster), resulting in visibility of 1/4 mile or less.  The 1947 storm had the snow, but not the winds.  In fact, the snow was observed to have fallen “silently and steadily” for almost 24 hours.  The snow fell at a rate of three inches per hour.  That was enough to cause white-out conditions extreme enough and for long enough to classify it as a blizzard, which is why some people still classify it as one.  Officially (according to the National Weather Service), the 1947 Boxing Day “Blizzard” is really just a snowstorm, however.

That wasn’t the only thing that was different about this storm. Most storms come into New York City from the west (typical rainstorms and snowstorms). There are some winter storms that come up heading northeast (hence their name “nor’easter”). This storm came from almost due east, heading west for many miles inland. Adding to the unique qualities of the storm, the snowfall was isolated to New York City and Newark, New Jersey. As the storm moved onshore, it developed into a mesoscale convective system. This led to “ocean-effect snow” that was primarily limited to the NYC metro area. The storm lost its moisture feed as it moved further inland. Consequently, most of the rest of New York state and southern New England received only a few inches.

A Day In The Life

The writers and photographers at Life Magazine were hard at work in downtown Manhattan during a large part of the storm. By that afternoon it was obvious that New York City was in the midst of a historic weather event. As the snow piled up, the Life employees spilled out into the streets to record the effect of the storm on the city. Later they recorded the day in words and pictures…

“At 3:20 in the morning it began to snow in New York City. By the time most New Yorkers were going to work the blanket lay three inches deep. But the city, used to ignoring all natural phenomena and reassured by a weather forecast of “occasional flurries,” went about its business. But as the day wore on this characteristic blasé attitude vanished. The air grew filled with snowflakes so huge and thick it was almost impossible to see across the street. They fell without letup all morning, all afternoon and into the night.

Long after night fall the illuminated news sign of the New York Times flashed an announcement to little groups of people huddled in Times Square that the snowfall, which totaled an amazing 25.8 inches in less than 24 hours, had beaten the record of the city’s historic blizzard of 1880. A faint, muffled shout of triumph went up from the victims.”2

The Aftermath of the Boxing Day Blizzard

The Boxing Day Blizzard happened in that interesting middle space between turn-of-the-century everyday life and modern America. Folks still received their milk at their homes. Coal for furnaces was regularly delivered. A run to the grocery store was only for the needs of the next day or so…and most town folks walked there. There were no snow removal services to clear roads, parking lots, and sidewalks. A snowstorm of any size would slow everything down considerably. This one stopped it all for a week and packed snow into NYC for weeks afterward.

The cold temperatures stuck around for another week and even then didn’t rise by much. The rest of that 1947-48 winter season was especially snowy. Winter seasons such as that grew the awareness that snow removal services were essential to the function of the modern city.

Don’t let this year hold any surprises for you that you haven’t prepared for!  We have been stockpiling supplies and doing maintenance on all of our equipment.  Our customers aren’t going to have to wonder if we are going to be there for them with everything that we need.  Our experienced staff and state-of-the-art equipment will get their businesses cleared of snow and ready to get to work!

Aren’t one of our customers yet?  A snow removal service contract with Brancato will ensure that we have you covered no matter what winter weather is headed our way!  Contact us today and get your free quote.  Our sales staff are friendly and knowledgeable and would love to help you figure out how best to meet your snow removal service needs.  After that, one of our service managers will set up a site visit and we will get the process moving forward quickly and easily!