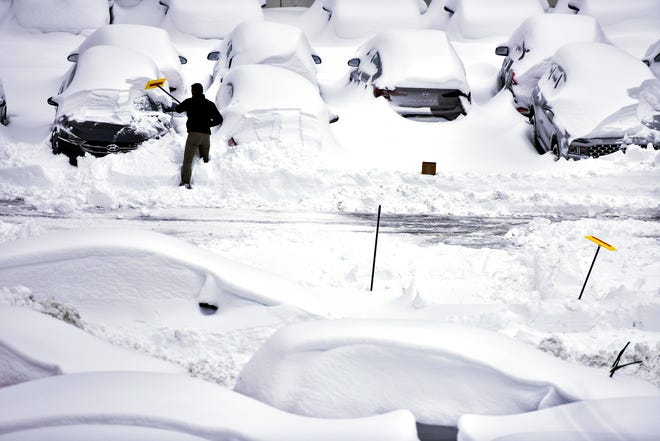 Snow removal services are one of those things that you often don’t think about until you need them.  But winter weather is unpredictable and snow is an inevitable part of winter in New Jersey. Is climate change bringing an end to snow and snowstorms? If this past winter is any indication, that would be unlikely.

The Storms Of The Good Old Days

When we think about snowstorms, our thoughts often go to “the good old days”.  We remember those big snowfalls from our childhood. Or maybe those stories our grandparents would tell us about “the big one” from years long forgotten.  But we don’t actually have to go that far back in time to find those large snowstorms.  Some of them are closer than we think.

In New Jersey, we look back to the importance of the Great Blizzard of 1899. It is our measuring stick for what makes a record-breaking snowstorm.  That storm blew in just before Valentine’s Day, 1899. It brought a punishing bomb cyclone to the East Coast. The inhabitants of that area had already been covered by a snowstorm just days before.  This new storm brought record snowfall to the entire seaboard, from Florida to Nova Scotia.

Snow In Unexpected Places and Beyond

Florida suffered in -2 degree temperatures with up to two inches of snow on the ground.  Tampa experienced its own version of “lake-effect snow”. As the storm pulled moisture off of the Gulf to feed what was described as a “blizzard”.  As the storm moved up the coast it strengthened.  By the time it had reached the Carolinas it had already transformed into a monster. The barometric pressure dropped more than 20 millibars in just 12 hours. That made it one of the most powerful bomb cyclones on record.  It moved up the coast dumping up to eight inches in Georgia and over ten inches in the Carolinas.

Once it passed there, the snowfall became a serious problem.  By Tuesday morning (February 14, 1899), Washington DC was digging out of 20 inches of snow. Baltimore was shoveling over 30 inches.  The storm continued up the coast dumping more snow on already snowy cities. None of them surpassed the record of the 34 inches blanketing Cape May, New Jersey. It set a 122-year-long record for the largest snowfall for a storm in New Jersey.

But the snow was only half of the problem. The punishing cold of the storm was devastating.  The Mississippi River was frozen from its headwaters to below Hannibal, MO for the rest of the month.  Ice moved down the river closing it off from its convergence with the Ohio River. It shut down shipping and sank two boats.  The ice would descend down the Mississippi River chocking off one port after another. The ports at Memphis and then Vicksburg closed on the 11th and 12th. Eventually, the entire river was closed to shipping by February 13, 1899. The ice at the mouth of the Mississippi River at New Orleans was reported to be 2-inches thick.

Crops were damaged throughout the South and livestock was lost.  Some bird populations were decimated, with bluebird and quail populations completely wiped out in parts of Virginia and Tennessee.  The Georgia peach crop was destroyed.  The cold was so extreme that the bay between Galveston Island and the mainland completely froze over. The Nueces River north of Corpus Christi froze hard enough to cross.  Heavy frost was experienced as far south as Cuba. Despite the cold air traveling over the warm Gulf Stream to get there, it still damaged crops in Havana.

Different Ways To Look At The Same Situation

But while the cold and snow were the cause of much consternation, some people found it to be more of a boon.  Plumbers throughout the United States found themselves in great demand.  Some places needed to embrace their services more than others.  In Chicago, the snow had moved past without many flakes falling to the ground.  As a result, the frost permeated the ground to a depth of five feet.  This caused much damage to water and service pipes.  Some plumbers used a more novel solution to thaw the broken lines, namely electricity.  The ice houses also found this to be a lucrative event. As an Albany, NY newspaper pointed out, “the crop was unexcelled both as to quality and quantity”.

Additionally, coal companies found this to be an unexpected boon.  Prices for coal rose by 75% during early to mid-February.  The period of cold challenged every household to keep its inhabitants warm.  Sadly, some succumbed to the deep freeze from Washington state to the East Coast.  A couple of weeks of freezing temperatures were not enough to cause a coal shortage, however.

Others decided to take advantage of closed schools and businesses.  As far south as Montgomery, Alabama, people took to sleigh-riding and skating for over three days.  There were snowball fights recorded on the steps of the Florida State Capitol building.  The residents of New Orleans were undeterred by the unusual cold. They briefly postponed their annual Marti Gras parade only until the streets could be cleared of snow.

This was such a massive storm that the record snowfall for a multi-day snowstorm in New Jersey in Cape May, NJ stood unchallenged until this year.  While the jury may still be out on the veracity of the claim, records were already set. The fact is that February of 2021 was the snowiest for Northern New Jersey since 1895!  It was the seventh snowiest for the state at an average of 23.5 inches. But the northern counties recorded a whopping 36.9 inches!  In fact, the top four of the ten snowiest Februarys for the Newark area were in the past twenty years!

Almost 122 years after that record-breaking storm, that other storm raged across the United States on January 28-February 3, 2021.  Making landfall in Northern California, the storm packed 125 MPH winds.  It caused an atmospheric river event over areas still recovering from massive wildfires the year before.  It moved across the nation, although without the extreme temperatures seen with the 1899 storm.  By the time it reached the Chicago area, it was dropping over 12 inches of snow.

It continued to gain strength as it approached the East Coast, gaining the moniker “The Groundhog Day Nor’easter”.  As it moved up the Eastern seaboard, it dumped increasing snowfall amounts. Eventually, it ended up in Newark dropping 18.2 inches and inundating Mount Arlington, NJ with an astounding 35.1 inches.  It continued on up the coast, only to be followed a few days later by another nor’easter.  Hitting the metro area on Super Bowl Sunday, it deposited another 9.1 inches.  A cold blast of sub-arctic air that invaded the interior of the United States kept our temperatures low enough to ensure that a majority of that snow stuck around for the rest of the month.

Some Were Prepared, Some Weren’t

For those who had snow removal service contracts, the constant flow of snow and the cold temperatures that accompanied that snow wasn’t a problem.  They were covered and they knew it.  Their properties were cleared by a professional crew. There was a layer of material on the pavement to prevent ice from causing hazards.  Their employees could get to work and their customers could enter without issue.

Those without contracts were making frantic calls from one snow removal service to another. It took time and energy to try to find someone that could take on their property.  They would be left to waiting in line for the next service to free up and be able to help them.  They were at the mercy of increasing service prices with no end in sight for the continuing snowstorms and frigid cold.

Be Prepared With a Snow Removal Service Contract

Don’t be caught unprepared for winter’s inevitable arrival.  You don’t want to be making those frantic calls as the snow is falling and the weatherman is telling you to prepare for a long storm.  You also don’t want to take the hit to your checking account as one nor’easter after another travels up the coast.  Now is the time to get that snow removal service contract in place.

At Brancato, we are dedicated to giving you the best service at the best possible price.  Our crews are professional and we pride ourselves on our preparedness for the winter’s worst.  Contact us today to get a free consultation and quote.  We guarantee you will be satisfied!