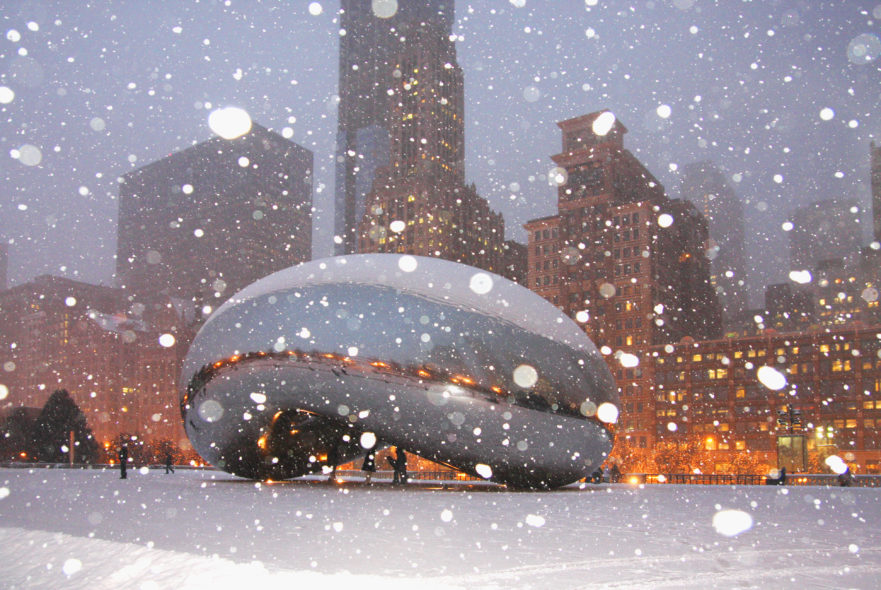 Even with the latest in weather forecasting, you may still be snow plowing in an unexpected blizzard.

Snow plowing is a job where having data ahead of time makes the job so much easier. Knowing where and when snow is going to come down can make all the difference. At Brancato, we make use of the latest in weather forecasting technology to serve our clients in the best way possible. But just having the data isn’t enough…you have to act on it, too.

These days we have a great amount of data at our fingertips.  From stock analysis to international politics to something as mundane as the weather forecast.  Every part of our lives is flooded with information.  Sometimes this leads to overconfidence in being prepared when we really aren’t.  As Americans, we can also fall into the trap of dismissing something that is not immediately occurring.  Such was the case for Chicagoans back at the end of January 2011.

It started as a very active front system that ran through the middle of the western US.  A high-pressure system developed over California and headed straight for the nation’s midsection.  Coming ashore right behind it was a strong low-pressure system.  That system tracked behind it, passing through the Northern Rockies and into Montana.

Meteorologists watched with great anticipation as this system collided with two others.  An Alberta clipper system that was rushing in from the north collided with the low-pressure system, briefly pushing it closer to Oklahoma and Texas.  This allowed the storm to more efficiently pull moisture through a low-pressure system over Texas that was drawing it from the Gulf of Mexico.  The storm began to intensify and was then directed northeast by the jet stream, taking aim at Chicago.

The Storm Hammers the Great Plains

The storm gathered strength as it moved over Texas and Oklahoma.  Heavy snowfall was proceeded by ice, creating treacherous road conditions and structural damage across both states.  Snowfall in the Dallas/Fort Worth area caused airport disruptions and complicated preparations for Super Bowl XLV.  Snow falling from the retractable roof of Cowboys Stadium caused several injuries.

In Oklahoma, the snow came down more heavily, causing structural damage in many places.  The boat dock of the Tera Miranda Marina Resort on Grand Lake collapsed due to the weight of the snow accumulations.  Highways and interstates throughout the state closed down as snow plowing was impossible in blizzard conditions.  In the Owasso area in eastern Oklahoma, a burn ban was lifted once the cold and snow moved in.  Only days before, wildfires had affected the city, exasperated by mild temperatures and dry conditions.

The Nation’s Heartland is Buried

The storm moved through the Heartland states of Kansas, Missouri, and Iowa next.  Kansas was the first to see the storm’s wrath.  Fifty-three counties in Kansas were declared disaster areas.  Over a foot of snow and whiteout conditions were the norm throughout the state.  Government offices were closed and traffic was at a standstill.

Whiteout conditions also affected many of the roadways in Missouri.  Interstate 70, which belts Missouri linking St. Louis and Kansas City, was closed completely for the first time in its history.

Iowa saw great variations in snowfall as the storm tracked more directly to impact Illinois.  Western parts of the state only had about 6-7 inches of accumulation.  Cities like Keokuk and Fort Madison stumbled under up to 18.5 inches. Snow plowing was difficult and often was hampered by blowing snow and ice patches. Some roads remained closed as late as Wednesday, February 2nd as state troopers worked with the Iowa DOT to clear roads and handle accidents caused by the storm.

Chicago Braces for the Storm

The warnings were sent out well ahead of the storm. Two days before it was due to arrive the blizzard watches had been issued by the National Weather Service (NWS). Meteorologists were calling for caution ahead of what could potentially be a devastating storm.

By Monday night (January 31st), the voices on social media were sounding clear signs that the folks in Chicago were unimpressed. Sure, snow was heading their way, but to call it a blizzard felt a little dramatic. “Chicago kinda looks wimpy with all this fretting about the blizzard. It’s 2 feet of snow, not a class 3 kill-storm or anything” wrote one commentator. Others were a little more pensive. “Monday evening. No snow yet. Weather people are forecasting the Apocalypse. Stay tuned” wrote another.

Anyone just watching the residents of the Windy City would not have known that there was anything substantial coming their way. The commuter train schedule was kept at normal and many people remained in their offices well into the afternoon. But the snow was coming.

Do You Understand What Is Going On On Lake Shore Drive Right Now?

The storm moved into the metro area like a banshee. By mid-afternoon, the snow was falling in earnest. The winds moved to blow in from the north-northeast, blasting the city with gusts up to 50 MPH. By 5:00 PM vehicles were skidding off the roads and visibility was almost non-existent. By 8:00 PM Lake Shore Drive was closed, along with several other major thoroughfares. A unique combination of conditions caused the city to be pummeled by days of thunder, lightning, and hail mixed in with the unrelenting snow. All of that was driven by the continuous high wind.

Lake Shore Drive is one of the busiest roads in the city, funneling thousands of vehicles per day back and forth between the downtown office buildings and the northern suburbs. On Tuesday, February 1st, it was a barren and cold wasteland, filled with stranded vehicles of all shapes and sizes. Even metro articulated buses were stuck in the accumulating snow, forcing the more adventurous to strike out on foot to get to shelter.

The wind was fierce coming off of the lake and many of the vehicles were encased in snow and ice. As you moved further inland from the water, the buildings and other objects helped buffer the onslaught. Finally finding himself in a safer area after braving the difficulties of Lake Shore Drive, one young man asked a passerby the most pressing question born out of his recent experience. “Do you understand what is going on on Lake Shore Drive right now?!”

The Storm By The Numbers

The storm was ferocious. Over 21 inches of snow was reported from the storm, the third-largest in the city’s history. Sustained winds of 40-50 MPH were reported throughout, with peak gusts of up to 67 MPH at the edge of Lake Michigan. The snow fell at a rate of up to 4 inches an hour at its height, creating drifts of 10-15 feet across the city. Chicago-O’Hare International Airport closed ahead of the storm, canceling more than 2,000 flights. The CTA shut down all of their bus lines and most of the trains. The Metra commuter train lines fielded harsh criticism for not closing their lines sooner and not communicating their closures properly once they were decided.

Damage was reported all over the city. A portion of the roof at Wrigley Field was blown off. The rail switches for the CTA’s Red Line were frozen by the combination of high winds and heavy snowfall, causing multiple delays and closures. Schools and universities across the city were closed for days, as were federal and municipal offices. More than 177,000 homes were without power and almost 1,000 empty vehicles lined Lake Shore Drive.

One of the most arduous parts of the event was the difficulties experienced by the people stranded on Lake Shore Drive. As vehicles began to get stuck on the roadway the other vehicles had no way to get off of the road or go back the way they came. The articulated buses proved to be the biggest obstacles…literally. As they lost control while driving down the road or attempting to exit it, they would often slide and block multiple lanes.

The Chicago Fire Department (CFD) and Chicago Police Department (CPD) struggled to find ways to move people out of their vehicles and to safety. The raging winds drove the snow around exhaust pipes and shook the vehicles violently. People called emergency numbers as the storm continued and they began to smell fumes or ran out of supplies. Both departments resorted to using snowmobiles and garbage trucks outfitted with plow blades to get to the people and rescue them. The garbage trucks provided the weight and strength needed for snow plowing the roadway to get emergency vehicles in and out.

Snow Plowing and Other Cleanup

In the quiet hours after the wind and the snow relented, the clouds broke up and people began to venture out of their homes and apartments. Just beyond the Forest Preserves at an upscale hotel called The Westin O’Hare, a chuppah was being constructed under the stars. The hotel staff diligently cleared an area for the ceremony, the piles of snow forming a windbreak in the midst of the sub-zero temperatures. Surrounded by snow piles, snowdrifts, and the occasional chilly breeze, the young couple was married as many of their guests looked on from the windows of the hotel’s warm banquet hall.

There were many stories of snow forts and sledding and winter adventures had by adults and children alike. There were also stories of neighbors pitching in to help clear doorways and sidewalks. Many dug out their vehicles by hand as snow plows cleared the roads.

It took the city over 33 hours to clear Lake Shore Drive and reopen it. It would take days to clear the majority of it. Snow plowing was done by regular snow removal services(both municipal and private contractors) and the ragtag garbage truck plow fleet. Snow was piled onto hundreds of empty lots throughout the city. City services were overwhelmed, but slowly things returned to normal.

One thing is for certain, though, was that no one will soon forget the Groundhog Day Blizzard of 2011!

Brancato Is Your Best Choice for Snow Removal Services!

https://www.brancatosnowremoval.com/request-a-quote/The next storm could cost you thousands in lost revenue while your competitors are open for business ahead of you.  Contact us today to get your free snow removal services consultation and quote.
Don’t wait until you need it, get your contract in place today.